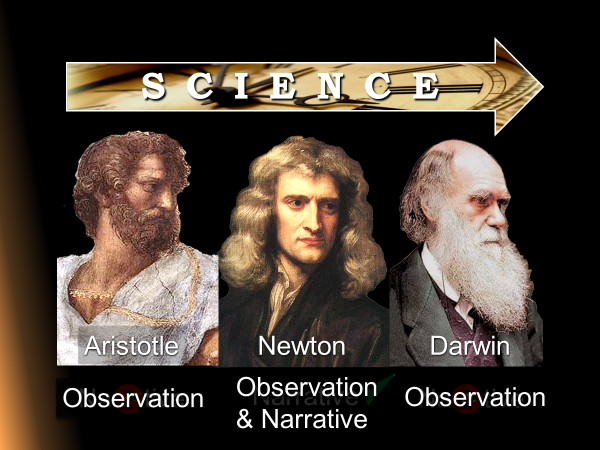 The word “science” comes from the Latin root for knowledge, “Scientia.”  Modern science has its roots in Egypt and Mesopotamia (especially Babylon and Persia).  These roots in astronomy and math helped shape classic Greek “proto-science.”  Aristotle and others helped form views of the world and the universe that were adopted and held by medieval Europe (including the Roman Church).  The “Scientific Revolution” of the 16th Century and onward drastically changed many traditional views.

As for the subject of origins, Aristotle rejected the notion of a narrative and preferred only observation to understand reality.  Isaac Newton, a devout Christian, believed the Biblical narrative to be factual and reliable, and used it in conjunction with observation.  However, the “Age of Reason” (18th Century) drove science to its current humanistic philosophy of rejecting the Bible and even the existence of an active God.

It can be argued that the field of origins studies is less science and more philosophy, since much of the competing theories (like creationism and evolutionism) are not testable or falsifiable.  Never the less science has become determined to exclude God in any discussions.  “Materialism” is the basis for understanding origins;  that is, there are no supernatural forces at work, only observable nature and its materials.  Said Harvard biologist Richard Lewontin, “We have a prior commitment, a commitment to materialism.  Moreover, that materialism is absolute, for we cannot allow a Divine Foot in the door.”

Lewontin’s admission is refreshingly honest, but it has the effect of limiting options for interpretations of the natural world.  A Creator is excluded from the discussion by design.  This prejudice has harmed science’s image among the millions who have experienced a living connection with the God of the Bible.