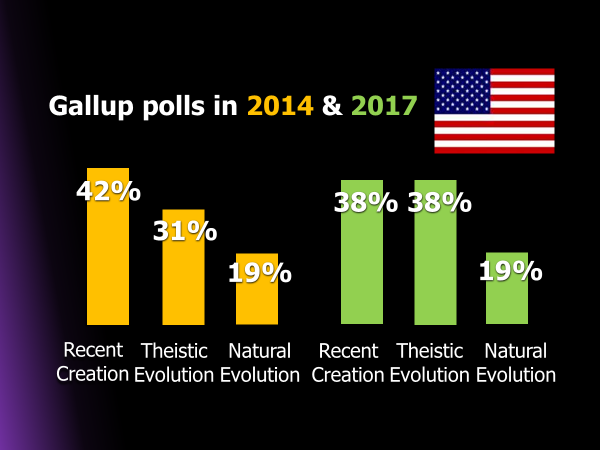 Unlike other western developed nations, America still retains a high belief in God as the originator of life.  The two latest polls (2014 and 2017) show this; they don’t quite add up to 100%, as some “don’t have opinions!”  See below.

The 19% of those who believe nature was capable of creating and organizing itself has a high proportion of millennials in it, as there is a trend that atheism is seen as “cool” by many younger Americans.  This reasoning is partly based on the perception that religion is the root of much world strife.  That percentage was around 10% for much of the last hundred years of poll-taking, rising only fairly recently.

Theistic evolution is a belief that God has been making species (including man) via millions of years of evolution.  We can assume the belief is held by people who have a high view of both religion and science and are trying to make them compatible.

The polls below reveal a downward trend in the American public’s knowledge of creationism and its tenets.  This website is dedicated to helping to reverse that trend!