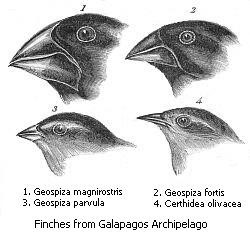 What Is the Theory of Evolution?

“Evolution” in the context of origins means the historical changes in plants and animals over time into their current forms. It is a “theory,” which is a scientific model of interpretation and is widely accepted today.

The theory of evolution has been around since at least the Greeks.  The Greco-Roman philosopher Lucretius believed animals that adapted were the ones which survived.  He also believed no gods were involved in the operation of nature, only “chance” was involved.

By the time of the Age of Reason in the 18th Century, western thought and culture was beginning to turn away from Christian traditional views of God and the authority of Scripture.  And in that period a process of origins that did not involve a Creator God caught on.

This trend called “humanism” affected all disciplines, including both science and religion.  Charles Darwin’s religious training at Cambridge was taught by a faculty who had only one professor who believed in the historicity of Genesis.  But Darwin did not originate the theory of evolution itself.

What Darwin did was postulate a theory of how evolution worked.  His “Origin of Species” work, based much upon his journey on the H.M.S. Beagle to the Galapagos Islands, put forth the idea of “natural selection.” The star examples he used to support his theory were finches.  Though differing in bill sizes, it was thought they all shared a common ancestor.  This view is held now by creationists, too, though not at first.  But Darwin thought he was seeing “net evolution,” or permanent change.

Darwin grew up in England where un-natural selection showed how mankind could breed different kinds of pigeons, chickens, rabbit, horses, dogs, cattle and so on.  But how could nature (not man) select parents and thus the way the offspring would look?  How about the strongest, fastest, most able-to-reproduce animals…would that drive changes?  And thanks to thinking by geologists like Charles Lyell, the age of the earth was beginning to be thought of as perhaps one or two million years.  With long ages and little changes, that would add up to big changes…what some call “macroevolution,” or major changes in life forms.  And this was quickly accepted by the culture at the time.

“Microevolution” is small scale changes in animal species.  For instance, all dog species today are descendants of a single pair of wolves.  There can be large changes, but not outside certain designed-in boundaries…like it’s impossible to have a thirty foot tall poodle with eighteen legs and feathers.  Nearly all observed mutations result in lesser quality individuals, generally sickly and unable to reproduce.

Nineteenth Century science was not advanced like today, especially in the areas that were somewhat in their infancy…like genetics.  In Darwin’s day the human body was thought to be composed of jelly (protoplasm) in boxes (cells).  Had he or science at that time known the complexities of the composition of cells, for example, with their super complex machinery, might the theory have been so quickly accepted?  However, there was a perfect storm in the mid-Nineteenth Century to accept Darwin’s views.  In Germany they were finding an ancient man’s bones in a cave (the origin of “cavemen”) and also in Germany a fossil of the Archaeopteryx (a lizard-like bird, seeming to have shown evolution).  Add to that the widening field of dinosaur discoveries (at first, hard to explain from a creationist standpoint).  Humanism’s view of the Bible not being authoritative found good soil to sink deep roots in with these developments.

Though Darwin is celebrated for his work, his actual theory of natural selection is no longer believed to be the mechanism for evolution.  Since there is no new information or change introduced in an animal line, all that “survival of the fittest” can accomplish is making really healthy examples of that life form.  Nowadays the most popular mechanism for evolution is believed to be mutations.  This is also called “Neo-darwinism.”

Mutation is basically a mistake in copying the DNA from a parent to an offspring.  That means it is thought that all we see in the animal and plant kingdoms is the result of countless mistakes, amazingly resulting in advancing complexity with mutual dependency, like the bee and pollinated flowers.

An example of a scientist doubting Neo-darwinism is found in this quote by British physiologist Dennis Noble of Oxford University….

Noble is requesting his peers to come up with a better mechanism for what makes evolution work.  However, it is true that most scientists believe in the theory of evolution, even if the mechanism is yet to be discovered.